Movember (a portmanteau of the Australian-English diminutive word for moustache, “mo”,[1] and “November“) is an annual event involving the growing of moustaches during the month of November to raise awareness of various cancers, such as prostate cancer. The Movember Foundation runs the Movember charity event, housed at Movember.com.[2] The goal of Movember is to “change the face of men’s health.”[3]

By encouraging men (whom the charity refers to as “Mo Bros”) to get involved, Movember aims to increase early cancer detection, diagnosis and effective treatments, and ultimately reduce the number of preventable deaths. Besides annual check-ups, the Movember Foundation encourages men to be aware of family history of cancer and to adopt a healthier lifestyle.[4]

Since 2004, the Movember Foundation charity has run Movember events to raise awareness and funds for men’s health issues, such as prostate cancer and depression, in Australia and New Zealand . In 2007, events were launched in Ireland, Canada, Czech Republic, Denmark, El Salvador, Spain, the United Kingdom, Israel, South Africa, Taiwan and the United States.[5][6][7][8] As of 2011, Canadians were the largest contributors to the Movember charities of any nation.[9] In 2010, Movember merged with the testicular cancer event Tacheback.[10]

In 2012, the Global Journal listed Movember as one of the world’s top 100 NGOs (non-government organization).[11]

Seven Nightly News aired a story in 1999 including a group of young men in Adelaide, South Australia who coined the term “Movember” and the idea of growing moustaches for charity throughout the month of November.[12] In the news report, members of the Adelaide-based “Movember Committee” explained how they came up with the idea for Movember one night in the pub. The group started with 80 men from Adelaide and soon became a nationwide phenomenon. They also aimed to raise money for the RSPCA through selling T-shirts in what they termed “Growing whiskers for whiskers”.[12]

In 2004, an unrelated group in Melbourne, Victoria organised an event where 30 men would grow a moustache for 30 days in order to raise awareness for prostate cancer and depression in men.[13][14] This group would later become the Movember Foundation charity.

Public hospital in Brazil with an inflatable moustache in November 2013

The charity launched The Moscars in 2010, an online global user-submitted video contest that helps Movember participants showcase their involvement in the movement.[18] Submissions cannot be longer than 4 minutes each, and prizes can be won in several categories.

The very first champion was Mark Knight from London in 2010. South Africa’s Anton Taylor won the title in 2011, and in 2012 it was Chris Thwaites from New Zealand who won the coveted sash. 2013 saw Sweden’s Tom Rickard crowned.

In November 2007, at Scots College in Wellington, New Zealand, several graduating students were banned from end-of-year prizes for growing moustaches and the college threatened to ban a senior student from their NCEA examinations (official secondary school qualification) for growing a moustache during November.[20]

In 2007, the Movember Foundation events were featured on Australian tabloid current affairs program Today Tonight, which accused the foundation of spending a disproportionate amount on running costs and high salaries for its directors.[21] The financial summary of the Australian 2008 Movember campaign listed campaign costs (administration and fundraising) as being 8% of the total amount raised.[22][23] In 2007, campaign costs were listed as 9% of total amount raised.[24] 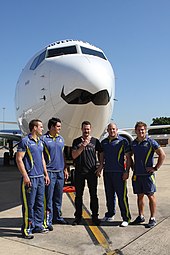 Members of the Australia national rugby union teamsporting moustaches at the unveiling of a promotionally decorated Boeing 737-800 aircraft, during Movember in 2011

In 2011, Google Chrome partnered with Movember to create a video. The video featured real participants, and how they utilize the web and Movember.com to raise awareness and funds for the cause. The video generated well over 1.1 million views. It featured the Handsome Furs song “Repatriated.” [25]

In 2010 and 2011, Movember partnered with TOMS to create limited edition Movember shoes for those participating.[26]

In 2011, Qantas supported Movember by painting a moustache and “Movember.com” on one of its airplanes.[27]

In 2011, the world’s largest sandcastle Mo was built on Bondi Beach, in Sydney, New South Wales.[28]

A 2012 Movember video featuring Parks and Recreation star Nick Offerman was one of the top 10 most watched charity videos of the year, with 1.9 million views.[29] Offerman made additional sketches for Movember 2013.

Since 2012, Royal Mail has supported the Movember campaign and created a special postmark featuring a moustache.[30]

In 2009, many of the Australian rugby union team players were seen sporting moustaches during the Autumn Test Series.[improper synthesis?] 2009 F1 World Champion Jenson Button started his support for Movember by showing off his blond moustache at the Abu Dhabi Grand Prix.[improper synthesis?]

Indian cricketers Ravindra Jadeja and Shikhar Dhawan support this cause too.

In 2010, some of the Montreal Canadiens were seen sporting moustaches during the month of November, with a video appearing on the Canadiens homepage, thus confirming the worldwide spread of Movember.[40]

Movember is regularly supported by sporting organisations and celebrities in New Zealand, with names such as national rugby captain Richie McCaw[53] actively involved in supporting the charity.

Since 2004, the Movember Foundation charity has used Movember to raise awareness and funds for men’s health issues in Australia and New Zealand. Monetary proceeds go toward the Prostate Cancer Foundation of Australia, the Cancer Society and Mental Health Foundation of New Zealand, and Beyond Blue.[54]

In 2008, the Movember Foundation started the event in the Republic of Ireland. The beneficiary in that country is Action Prostate Cancer, an initiative of the Irish Cancer Society.[58]

Players in Football Manager 2015 grow moustaches during the month of November.[60]

Sony released a moustache sticker intended to be placed on the front of the DualShock 4 controller in support of Movember.[62]

Since the Vietnam War era, U.S. Air Force members have participated in Mustache March, where Airmen grow moustaches in good-natured defiance of facial hair regulations during the month of March.

Many men and women participate in a similar international event called No-Shave November, a web-based, non-profit organization that “encourages people to donate what they would otherwise spend on hair grooming to the American Cancer Society“.[64][65] The campaign started in late of 2009, with around 50 official participants, mainly family and friends.[66] The campaign grew over the following years, and claims to have raised more than a million dollars in 2014.[67][non-primary source needed]

In 2015, a Decembeard event promoted awareness of bowel cancer.[68]